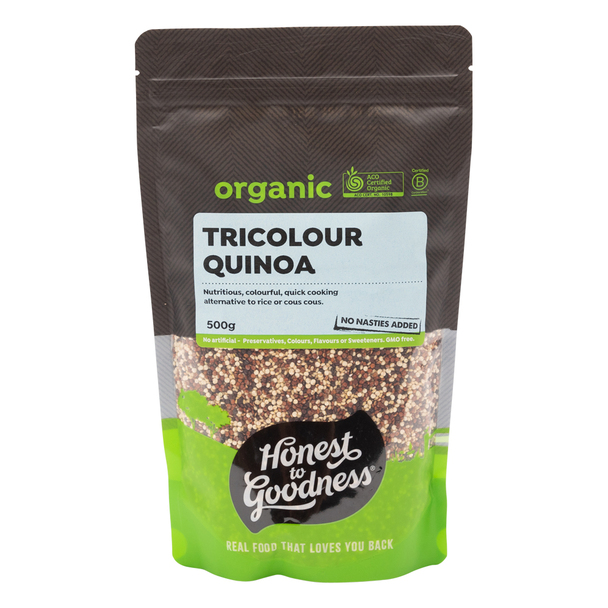 Organic Tricolour Quinoa is a balanced combination of white, black and red quinoa. Similar in nutrition, this blend creates a colourful, unique look to your dishes.

Pronounced ‘keen-wa’, quinoa is technically not a grain, but a seed or pseudo-grain. It is packed with nourishing plant-based goodness – in particular a rich content of dietary fibre and protein.

Great for those avoiding wheat or looking for a rice alternative, quinoa in all its different colours is easy to prepare and super versatile.

No GMO. Preservative and additive free.

Most quinoa (including ours) has already been rinsed prior to use to remove the coating but should still be rinsed in a fine strainer under cold running water until the water runs clear to remove any residual residue or dirt.

Quinoa is a great alternative to rice so use it to accompany stir-frys or meat dishes. It is also great in baking particularly cakes, muffins, porridge and salads.

Quinoa is native to South America where it growns well in a cool mountain climate. The quinoa plant is a relative of beets, spinach and Swiss chard, but we treat its seeds as we would a grain, preparing and eating them in much the same way.

As it grows, the seed is coated with a dark, almost black layer of ‘saponin’ that has a bitter, soapy taste. Saponin is the plant’s natural defence against insects, birds and other small animals that might want to eat it on the stock. Once harvested, the seeds are removed from the stalk, cleaned of any dirt and bacteria, rinsed to remove the saponin and packaged.