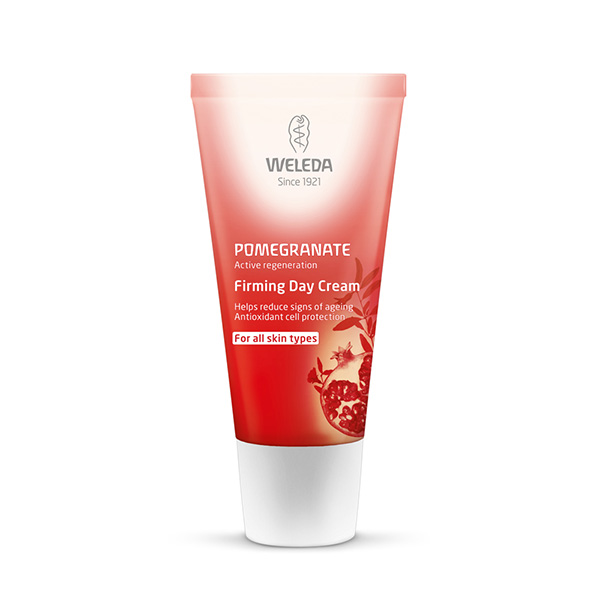 Renews and protects, for radiant skin after the age of 40

Weleda cherishes the ancient wisdom which held pomegranate as a symbol of life-force, vitality and longevity. In our Firming Day Cream, precious organic pomegranate oil is carefully blended with golden millet, argan and macadamia oils to create a light cream which nourishes and regenerates during natural ageing.

Antioxidant – protects from free radicals. Regenerating, with proven effect on skin bounce, tone and bloom. Wrinkles are reduced and skin feels smoother. Suitable for use under make-up. Vegan and free from synthetic fragrance, colours, preservatives or raw materials derived from mineral oils.

The pomegranate, punica granatum, although from the outside it looks brittle and dry, conceals a surprisingly rich and plump interior with countless seeds, each cushioned in juicy red flesh and resembling small, jewel-like berries.

A symbol of beauty and strength

In many cultures the pomegranate has been familiar for thousands of years. Originating from the ancient Persian Empire, which included modern-day Greece, Turkey, Iran and Iraq, it is still primarily cultivated in the Mediterranean, in the Middle East and India. In these cultures the fruit has been seen as a symbol of beauty, fertility, sensuality and strength since ancient times. The plant itself can reach quite a respectable age – some specimens are over 200 years old. In recent years the fruit of the pomegranate has been re-discovered for cooking and new cosmetics.

Precious pomegranate seed oil has antioxidant and regenerative properties because of its high content of polyphenols. These naturally-occurring phytochemicals act as an excellent scavenger of free radicals, which are known to be responsible for accelerating ageing in skin and cells. Pomegranate seed oil revitalises skin cells so that the skin is tightened and smoothed in a natural way. Its many positive properties have also recently been confirmed by numerous scientific studies.

Pomegranate’s highly invigorating and revitalising effect on the skin is enhanced because the growth processes of the plant don’t happen consecutively, with recognisable breaks between phases. Instead they flow into each other, overlapping and happening simultaneously – just like our human life phases.

From the age of 40 we benefit most from the positive properties of the pomegranate. At this life stage, we look back on our experience and are able to recognise who we are, and who we are not. But as we grow older our skin changes – its vitality diminishes, the regeneration processes slow down and hardening tendencies can no longer be automatically counter-balanced overnight.

The yellow to reddish coloured, relatively thick Pomegranate Seed Oil is one of the active agent oils and is rich in the rare punicic acid (an unsaturated fatty acid). This valuable vegetable oil also has antioxidant properties that improves the regeneration of the skin and is therefore considered to be an outstanding skin care product for dry, aging and stressed skin.

Sesame Seed Oil works as a perfect massage oil and is used for the care of wan, dry and mature skin but it is also used as a hair conditioning product. It has a great antioxidative effect, skin caring properties and is an ideal carrier oil for active agents. It comprises of a high content of unsaturated fatty oils, such as oil and linolenic acid, as well as phytosterols and Vitamin E (esp. gamma-tocopherol).